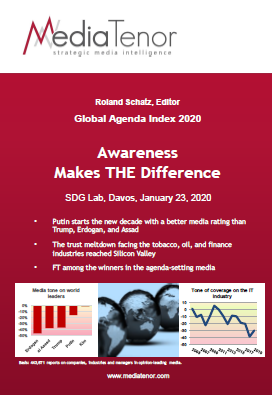 Benefits of registering
Registration on the Media Tenor website provides you with free access to our restricted archive of case-studies, reports and newsletters. You can also elect to receive our regular newsletters on a variety of media related issues.

Human Trafficking on the Rise, but Media Attention Still Lags

While human trafficking remains one of today’s most alarming global challenges, media coverage of the issue has remained low and has even seen a decline since its peak in 2007. This, despite the pain of a growing number of victims, most of whom are young women trafficked for – among other things -- labor, sexual exploitation, and/or forced marriage.

The Freedom Shield Foundation (FSF), a 501c3 U.S.-based non-profit organization, recently celebrated its 10-year anniversary. FSF is a counter human trafficking organization responsible for rescuing and providing trauma care for victims of sex trafficking, organ trafficking, recruited child soldiers, and labor trafficking. FSF currently operates in North America, Central and South America, the Middle East, and Africa. To date, FSF has rescued over 3,200 victims of trafficking, with 2,300 of those rescues occurring over the last three years.

On December 3, 2019, the Freedom Shield Foundation will be raising donations as part of the National Day of Giving held in the United States.